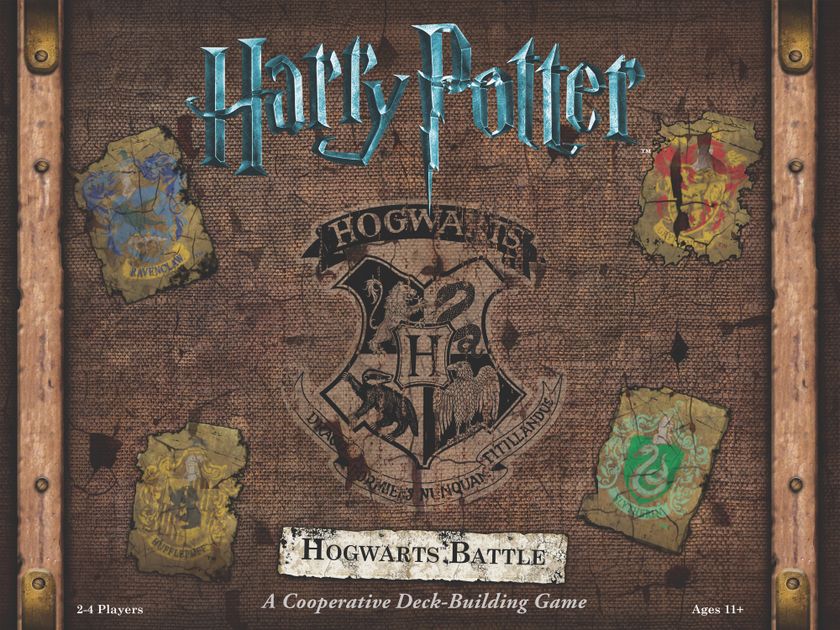 Harry Potter: Hogwarts Battle is a cooperative board game that pits you and up to three (with expansions, four) friends against a villain cadre from the movies. Licensed up to the gills, every card in this deck-building battler bears some image or illustration from the films, making it awfully easy to lose yourself in the wizarding fantasy.

At first, your crew, each one playing as one of the show's main stars--I ran as Harry, who the game positions more as a support character than a destroyer of magical worlds--stars off weak. You're clashing with Crabbe and Goyle amid Hogwart's hallways, firing off piddly spells and smacking each other around with Hedwig and someone's toad. It's a charming challenge, albeit a basic one for any group familiar with collecting cards to bolster one's arsenal in future turns.

Balancing the battling with preventing the villains from gaining too much 'control' over iconic Harry Potter locations brings you from one year to the next, all the way up to good ol' Voldemort. By the original game's end stages, levels are often fraught, with villains packing enough heat that the wrong assortment (enemies are randomized at every mission's start) can bring a swift end, with Harry and his crew slaughtered one by one until the Deatheaters rule the world.

While the game's swingy-ness could leave an ashen taste in the mouth, we were always keen to reset and give it another go. Change up the strategy, hope for some different luck from the ever-increasing shop deck, and maybe this time we'd have the villains backed into a corner from which they could never escape. This time, Hermione and Ron would deliver, in turns, such a thumping that Voldemort would flee off into the distance, never to return.

We played through the game's first expansion, the Monster Box of Monsters, with gusto when it arrived. Introducing creatures, like bogwarts and various dragons, the expansion added difficulty while finally giving us ways to remove unwanted cards from our decks. The challenge persisted, though when the expansion's four missions ran out we'd assembled a frightening strategy to succeeded no matter what the fates sent our way.

Nonetheless, fond memories led us to acquire the Charms and Potions box when it came out recently. Hoping for a return to the earlier, white-knuckle days of wizarding warfare, we set out hunting Hogwarts horribles while tangling with the newfound mechanics in potion brewing and charm-casting.

Rather than a tense struggle, though, we found the new materials only added to our strength. Charms gave our wizards a free extra ability every turn, allowing powerful cards to be acquired early on. Potions, easily brewed with simple conditions, gave minor-yet-nifty benefits that tipped the scales so far in our favor that we found ourselves winning without much effort.

In this game, the heroes only gain power throughout. The villains, thus, have a short period of time to throw the heroes so far behind that they'll never recover. The Charms and Potions expansion gives so many extra boosts to the heroes that, we've found, the villains simply don't have a chance to make things interesting.

And yet, I don't think we're the audience for this expansion and, indeed, for this game anymore. We've graduated, in a sense, from Hogwarts Battle. The Charms and Potions expansion would make a perfect addition for a group struggling somewhat with the main game, or cutting levels so close that a boost might make for a less frustrating experience.

As for us, well, we still have some harrowing Betrayal: Legacy jaunts to get through, and then there's always the island adventures in Spirit Island. In short, it's a good time (COVID notwithstanding) to be a board gamer.