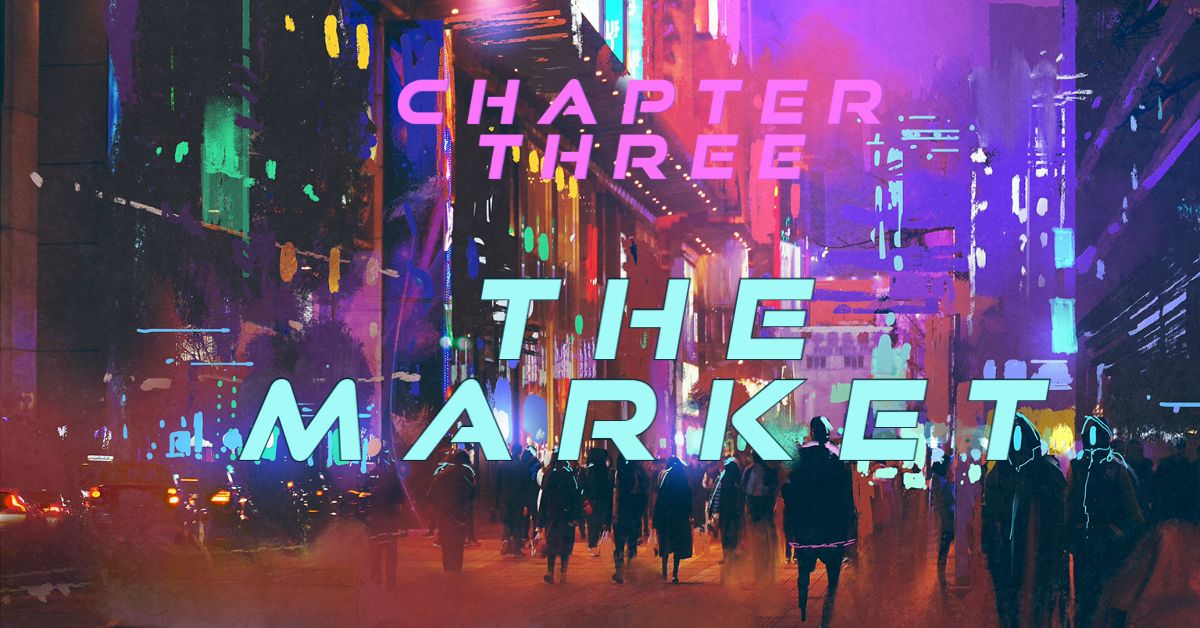 Priority or no priority, Vance couldn't make a trek out of the quadrant without a stop by his capsule. Getting there meant snaking through a few stuffed blocks, meshing by mid-morning crowds while doing his level best to keep the package, well, level. Vance slithered, quick-stepped, apologized and ordered his way by people meandering between shifts, between needs, or just moving to move. That last had its reason in the capsules dominating spaces above the shops and restaurants lining the blocks.

Vance's own home, a queen-sized capsule, sat above a market selling all the essentials for life on Fibbonacci: pre-cooked meals, endless energy drinks, and clerks willing to complain about station life for hours. Vance skipped the market today, slapping his phone against the shop's side door and climbing the narrow stair to the third capsule level.

Heading through onto his floor, vance always felt like he'd entered some neon beehive. Golden lighting ringed the circular capsule doors, a halo around a similarly golden name and capsule number. Another phone tap against the blue-purple capsule door had the entry swinging inward, revealing a tube tall enough for him to stand in, but not much wider.

Vance had his bed stuffed up against the capsule's end, where he could look out the windowed back onto the streets below. The tinted blinding on the glass shifted open as Vance walked in, the speakers built into the capsule flipping to today's pre-programmed playlist, sending bebop jazz bouncing into the space. The wall to the left, near the head of his bed, flickered from its dull blue to a screen, scrolling onto Fibbonacci's news network. All a routine built for the end of a day that Vance was far from seeing.

He pressed up above him, opening a storage cabinet. Reaching in, he pulled out his quadrant passport. Stuffing the thin sheet into his jacket, Vance told himself that he'd save up enough for an encoded phone next time, eliminating the need for the physical pass. That's what Vance had told himself last time too, until he'd upgraded the capsule's TV instead.

With one lingering look at the small fridge and the microwave atop it—already, Vance's bacon breakfast wore thin—the courier ditched his apartment, used the shared restrooms at the hallway's end, and bounced back down to get his run started.

"It's not polite to vanish like that," Sasha said when Vance hit the street.

At first, Vance didn't recognize the woman. She'd ditched the dolled getup from before, standing instead in casual fare, trading the heels for running shoes and the dressy getup for one with pockets. She'd lost glitter and gained grit.

Vance frowned at the implications.

"Had a high priority come through from a good client," Vance shrugged. "You weren't paying me to wait."

"I thought we'd threatened you?"

Vanced started off. The package wouldn't deliver itself. Snubbing Sasha and Reneau might make temporary enemies of the Troupe, but they had a whole goon gang at their disposal, and surely scoring the role of 'delivery man' was a step up over 'thug extra'. Any lingering animosity directed Vance's way seemed destined to fade against the prospect of inter-quadrant conflict.

In other words, Vance's professional life would be fine, thank you very much.

Sasha didn't see things that way. She matched Vance's gait, parsing his twists and turns through the streets with equal aplomb, all while picking through her phone as if for some merry stroll along the Ring.

"Gonna guess there's a reason you're following me?" Vance said when they hit a gap several minutes later, Sasha not a step behind.

"I thought you had the smarts to figure that out yourself."

Vance stopped, glanced back at Sasha, "You want me to deliver your package? Hand it over. I'll drop it after this run."

Sasha snagged a deep black oval from a pocket, handed it over to Vance. He stuffed it in a zipped pocket of his own, then fished out one of several combo locks and slid the tiny seal through the zipper's end.

"See? Even giving it the security treatment," Vance said. "Just for you."

"So nice, but can't I cut through that with a knife?" Sasha poked at the pocket, and Vance wondered if she counted her nails in the same stabby category.

"Whole pocket's lined with salty acid," Vance replied. "Put it together myself. Anything cuts through, what's inside gets soaked. Guaranteed to make any running on circuits turn corroded in a minute."

Sasha stopped her nail probe, but didn't take her eyes off the pocket, "Put it together yourself? What if it breaks?"

"That's not an answer to my question."

The next walking batch came upon them, a hurried crew transitioning from one job site to another, construction equipment trundling alongside the humans. Vance took the opportunity to dip and dodge through the collection. Another few minutes walk and he'd be at the Shades' edge.

Sasha wouldn't be deterred. As Vance left behind a crawling cart filled with fabricated shelving—all greens today—Sasha stood against a computer shop's wall on the right, watching.

"Can't help but notice you're still here," Vance said as she paired up with him again.

"Are you going to tell me you work alone?"

"Might surprise you, Sasha, but it's easier to move fast without someone slowing me down."

"Have I slowed you down so far?"

Vance didn't have an honest answer to that, so he dished a flustered shrug instead and kept on moving. The Shades exit, like any quadrant checkpoint, operated by splitting the street into two halves, doors on either side. Bored personnel monitored the lines, bearing Fibbonacci official uniforms—white and black, like Fibbonacci's star and the space around it—and directing people through with vague waves and slow scans.

"So you're coming with me," Vance said when Sasha joined him in the line.

"Finally, the man reads his lines."

"And ruin the twist ending?" Sasha laughed. "I don't think so."

"Aren't you trying to convince the Lady's Arms that you're a threat?" Vance asked as they moved up one spot at a time. "Won't they be less than pleased to get your message?"

"I'm not saving you if they decide they want to escalate."

"Don't need you to, Vance," Sasha said, digging her phone—the upgraded model with passport included—from her pocket. "I can take care of myself."

Again, Vance found himself without a ready response. Normally, Vance could riposte and reverse any conversational cut, but Sasha had come ready to play today. As if the new look cut down her theatrical nonsense and replaced it with a real-world edge. Maybe the Lady's Arms should consider the Troupe a threat, if this kind of transformation waited on the other side of the make-up.

They hit the quadrant gate and Vance went first, flipping up his passport and blinking through with a cheery green chime.

"Have a good run, Vance," the border woman said, barely breaking her monotone.

Vance gave her a nod, and stepped through. On the other side, just a doorway away, the Shades became Toredo, a free-wheeling marketplace that always seemed to be on the right side of chaos. If the Shades parleyed with the poor, Toredo gave those poor a rocket to either the stratosphere or the depths from which they'd never return.

Even here in this corner, drones buzzed around overhead, dragging streamers and calling out coded numbers. People waiting in line for the Shades listened, some entering the numbers they heard on their phones, right into the Toredo app. Vance had done that too on his first time through, before realizing the grab bags on offer tended to leech more from their winners through ads, subscriptions, and worse.

The constant prize onslaught made slogging through the immediate crowd worse than in the Shades, because nobody paid much attention to their own surroundings. On the right and left, casinos and pop-up stores selling who knew what dominated with flashing lights. To the newcomers, the dazzle would overwhelm, but to an old hat like Vance, it all came across as vaguely annoying, a drag on an otherwise pleasant romp across the station.

"Hey," Sasha said, coming up behind Vance and grabbing his arm with a grip that suggested strength beyond her looks. "Slow down."

"Slow down?" Vance hoped his face communicated exactly how he felt about that idea. "You do understand my job, right?"

"It's Toredo," Vance answered, confused. "It's always this way."

Vance squinted at her, one of the Troupe's top lieutenants. He didn't have her backstory, but the way Sasha looked around, almost dazed, suggested she had a more sheltered view than Vance would've expected.

"Have you ever been here before?" Vance said, pulling Sasha from the avenue's center and over to a dim spot between shops. "Have you even left the Shades?"

"Of course I've left the Shades!" Sasha bit back. "Just not this way."

"Okay, I mean, it's a lot, but Toredo's not dangerous. Ignore all the crap and follow me."

Vance struck out again, drumming his fingers on his right thigh. Sasha stayed close, now not just an annoying hangers-on but someone Vance had to take responsibility for. Well, he didn't have to, but now his damn conscience would smack him around if Vance ditched out on the Troupe star. Another complication on what had turned from a promising start into a sloppy middle of a day.

Past the entry point, Toredo shifted from its cheap games and scams barrage to its real namesake: the Market. Rather than tight buildings slammed together for maximum efficiency, the Fibbonacci designers had made Toredo's center a giant open area where booths sprang up and fell down with their owner's gyrating fortunes. Above, a clear blue sky shown on screens, clogged up with more bought-and-paid for ads and occasional bits of flare, like pixellated balloons.

Vance's phone buzzed as its proximity apps picked up his location and started pestering him with things to buy. Without a priority run, Vance might've stuck around for a hot minute—his capsule microwave had started turning everything to plasma—and hunted for a deal. As it was, Gio's request had its heavy weight in his hands.

"What're you carrying?" Sasha asked as they started around the Market's edges. "A pizza?"

"Yes. I'm on a high priority run to deliver a pizza several quadrants away. You've found me out."

"Sorry, habit," Vance replied. "I'm a courier. I tend to get treated like dirt, so I reciprocate."

Rolling his eyes, Vance stopped one more time, looked at Sasha, "Do you remember this morning? Piling on the coffees and the breakfasts?"

Sasha spread her hands, "You asked for the job!"

"Not one thank you. Not one please."

"Didn't realize you were such a softy."

Vance took a deep breath, considered any number of killer comebacks that might shred Sasha's ego and bring her down. He'd landed on a particularly nasty one when Vance noticed the color splashes around them, normally a neon rainbow's display, had concentrated to a bluish white. People, men and women, all wearing the same outfits bearing a faceless woman holding a golden circle, surrounded the pair.

Vance and Sasha turned, back-to-back, to look at the circle, scan those hungry faces. The Lady's Arms always went for a more die-hard crew, and that fervor burned in this bunch, the knowledge that your actions were sanctioned by divine providence.

"I thought you were just talking," Vance said. "Because this looks like a raiding party."

"We might've exaggerated," Sasha replied. "Sorry. Can you get us out?"

The circle came closer. Nobody pulled a weapon, and nobody outside the circle made a move. In Toredo, in anywhere on this damn station, interfering with someone else's problems just made them your own. That said, it didn't seem like the Lady's Arms were here for kills.

But Vance had a package to deliver.

"Are you ready to run?" Vance warned.

If Sasha wasn't, Vance wouldn't hesitate to leave her behind.